The final day of President Biden’s virtual climate summit is set to begin on Friday at 8 a.m., with a host of business leaders like Bill Gates and Michael R. Bloomberg scheduled to speak.

Here is a rundown of the biggest names and the topics they plan to address.

Which speakers should I watch for?

Energy Secretary Jennifer M. Granholm, Commerce Secretary Gina M. Raimondo and John Kerry, Mr. Biden’s climate envoy, will kick off the morning with a discussion on the importance of technological innovation in reducing carbon emissions. They’ll be joined by world leaders like Prime Minister Benjamin Netanyahu of Israel and representatives from energy companies.

Mr. Gates, the Microsoft co-founder, will also speak as the leader of Breakthrough Energy, an investment fund that supports projects to reduce carbon emissions.

Which global leaders are attending?

What happened on the first day of the summit?

Mr. Biden pledged that the United States would cut its emissions 50 percent to 52 percent below 2005 levels by 2030. His administration also vowed to substantially increase the amount of money the nation offers to developing countries to address climate change.

Other world leaders also committed to cut emissions. Prime Minister Justin Trudeau said Canada would reduce its greenhouse gas emissions 40 percent to 45 percent from 2005 levels by 2030, escalating its previous goal of a 30 percent reduction in the same time period. And Prime Minister Yoshihide Suga of Japan promised to cut emissions 46 percent below 2013 levels by the end of the decade.

Some leaders, like President Vladimir V. Putin of Russia, made vague commitments. Mr. Putin vowed to “significantly reduce the net accumulated emissions in our country by 2050.” And President Jair Bolsonaro of Brazil pledged to eliminate illegal deforestation by 2030, which was met with skepticism by those in the environmental community.

Neither China nor India made any new commitments. President Xi Jinping repeated China’s pledge to draw down carbon emissions to net zero by 2060 and Mr. Modi reiterated India’s promise to install 450 gigawatts of renewable energy capacity by 2030. 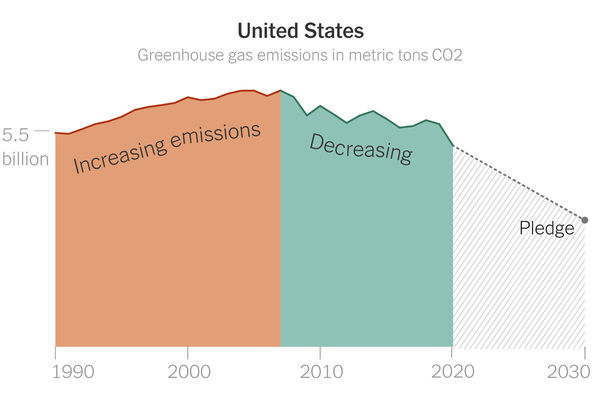 The U.S. Has a New Climate Goal. How Does It Stack Up Globally?

President Biden’s new pledge to cut emissions at least 50 percent below 2005 levels by 2030 is one of the more aggressive near-term targets among advanced economies.

Can Fortescue’s Andrew Forrest, a Carbon-Emitting Iron Ore Tycoon, Save the Planet?

To Learn Bees’ Secrets, Count Them One by One