A Slow-Motion Climate Disaster: The Spread of Barren Land

Brazil’s northeast, long a victim of droughts, is now effectively turning into a desert. The cause? Climate change and the landowners who are most affected.,

Climate change is intensifying droughts in Brazil’s northeast, leaving the land barren. The phenomenon, called desertification, is happening across the planet.Credit…

Photographs and Video by Victor Moriyama

CARNAUBA DOS DANTAS, Brazil — The land has sustained the Dantas family for more than 150 years, bearing fields of cotton, beanstalks up to a grown man’s hip and, when it rained enough, a river that led to a waterfall.

But on a recent day, with temperatures approaching 100 degrees, the river had run dry, the crops would not grow and the family’s 30 remaining cattle were quickly consuming the last pool of water.

“Fifty years from now, there won’t be a soul living here,” said Inacio Batista Dantas, 80, balanced in a frayed hammock. “I tell my grandchildren that things are going to get very difficult.”

His granddaughter, Hellena, 16, listened in — and pushed back. She grew up here. “I plan to work this land,” she said.

Scientists agree with her grandfather. Much of Brazil’s vast northeast is, in effect, turning into a desert — a process called desertification that is worsening across the planet.

Climate change is one culprit. But local residents, faced with harsh economic realities, have also made short-term decisions to get by — like clearing trees for livestock and extracting clay for the region’s tile industry — that have carried long-term consequences.

Desertification is a natural disaster playing out in slow motion in areas that are home to half a billion people, from northern China and North Africa to remote Russia and the American Southwest.

The process does not generally lead to rolling sand dunes that evoke the Sahara. Instead, higher temperatures and less rain combine with deforestation and overfarming to leave the soil parched, lifeless and nearly devoid of nutrients, unable to support crops or even grass to feed livestock.

That has made it one of the major threats to civilization’s ability to feed itself.

“There is a huge body of evidence that desertification already affects food production and lowers crop yields,” said Alisher Mirzabaev, an agricultural economist at the University of Bonn in Germany, who helped write a 2019 United Nations report on the topic. “And with climate change, it’s going to get even worse.”

Brazil’s northeast, the world’s most densely populated drylands, with roughly 53 million people, is among the most at risk. The region is known for droughts and poverty, inspiring novels about destitute field workers forced to abandon the land, as well as a genre of music, Baiao, in which accordion-backed lyrics tell of the difficult life here.

But things are becoming worse. The region had its longest drought on record from 2012 through 2017, and this year, another drought desiccated much of Brazil.

In August, the United Nations’ latest major report on climate change said Brazil’s northeast faces rising temperatures, a sharp decline in groundwater, and more frequent and intense droughts. Satellite images and field tests show that 13 percent of the land has already lost its fertility, while nearly the rest of the region is at risk.

“It’s reaching a tipping point,” said Humberto Barbosa, a top expert on desertification who has studied the Brazilian northeast for years. “A point of no return.”

President Jair Bolsonaro has taken no significant measures to reverse the process. Instead, he has pulled back environmental regulations, while empowering miners and ranchers, and overseen a sharp rise in deforestation in the country. That helps feed the cycles of extreme weather. Government data released last month showed Amazon deforestation is at its worst in 15 years.

Increasing deforestation in Brazil has alarmed officials around the world because it threatens the Amazon rain forest’s ability to pull carbon from the atmosphere. But it is also a primary cause of desertification, robbing the air of moisture and the soil of shade.

In the Serido region, a collection of dusty towns, family farms and industrial factories, the residents’ own impact on the land is most clearly illustrated by the rise of the ceramics industry. 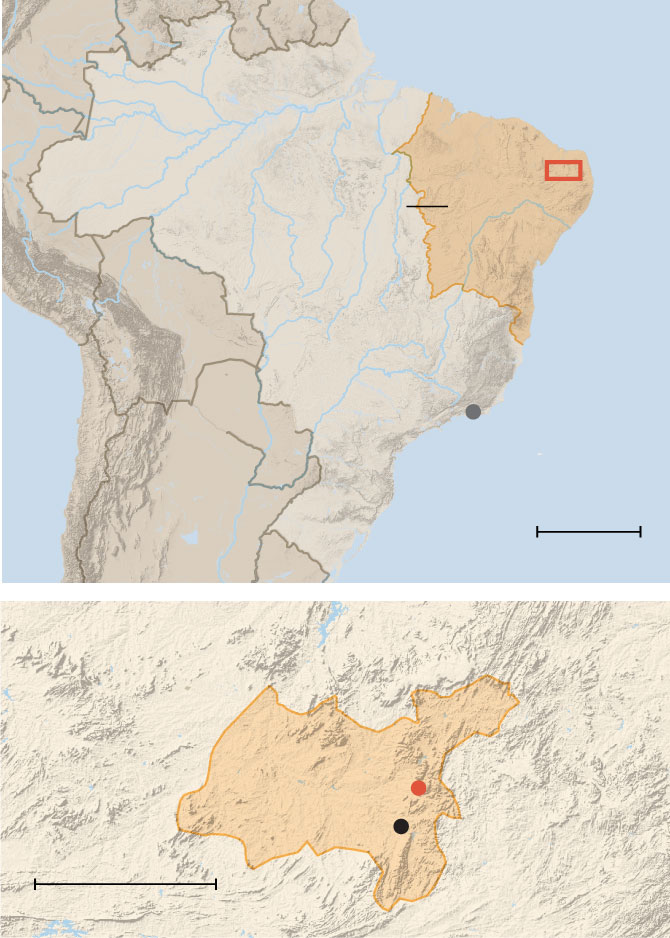 In the early 1980s, local businessmen saw an opportunity in the frequent droughts. When reservoirs and rivers evaporated, they exposed the nutrient-rich clay at the bottom, perfect for manufacturing the red roof tiles popular in much of the country.

Those entrepreneurs began paying landowners for their mud, and in a few years, dozens of ceramics plants employed hundreds of people. Parelhas, population 21,000, built a metal arch over the main road into town, announcing it as the “Tile Capital.”

Adelson Olivera da Costa was a pioneer of the industry, starting as a manager of one of Parelhas’s first factories in 1980 and buying it a decade later. At his small plant recently, a few dozen laborers laid out thousands of tiles to dry in the midday sun.

“For us, the drought is good news,” Mr. da Costa said in his cramped office. He said he had 30 employees, and neighboring plants run by a son and a daughter employed dozens more.

For an area long dependent on crops and livestock, ceramics were an economic jump start. But in time, the consequences became clear. Factories make the tiles by mixing water with clay, and then firing the result in a wood-burning oven. All those ingredients — water, wood and clay — are in short supply here.

Mr. da Costa’s factory, one of the smaller operations in the area, uses more than 2,500 gallons of water a week, pulled from a nearby well. “People aren’t sure,” he said of the water, “but we think it will never run out.”

Recent studies estimate, though, that the region’s groundwater is dwindling.

The factory’s oven runs all night, Monday to Friday. Just before 5 a.m. one weekday, two men pulled branches and trunks from large piles and stuffed them into six fireplaces that heated an oven the size of a house. The operation consumes 60 to 75 cubic meters of wood a week, or enough to fill five large dump trucks.

Then there is the tiles’ main ingredient, clay. Years ago, Mr. da Costa said he bought clay from the dried-up lake beds within a few miles of his operation. With those now depleted, he is hauling in mud from hours away.

Aldrin Perez, a Brazilian government scientist who tracks desertification, said it takes 300 years to deposit one centimeter of soil, while ceramics companies take three to five feet of soil each time they extract clay. “In seconds, they destroy meters of depth that were formed over millions of years,” he said.

That can have a devastating effect. The soil and clay they extract is crucial for retaining a proper balance of nutrients and moisture in the surrounding land.

“It kills the area,” said Damiao Santos Ferreira, the manager of Mr. da Costa’s factory, explaining why some people were hesitant to sell their clay. “It’s never the same.”

The factory pays landowners about $10 for 30 tons of clay, he said.

By now, most landowners know the consequences. Yet plenty still get desperate enough to sell. One of them was Mr. Dantas.

In 2010, during another difficult dry season, Mr. Dantas said his family almost ran out of money. To feed themselves and their cattle, they decided to cash in on their mud.

“Everyone agreed,” Mr. Dantas said. “It was necessary,” his son, Paulo, said.

The clay came from a reservoir Mr. Dantas’s great-grandfather built in the 19th century to supply water for their 506-acre land. When it evaporated each dry season, the family had planted beans, corn and cotton in the fertile bed left behind. It was one of their most productive plots of land.

But in 2010, instead of planting, the family watched four men with shovels excavate and haul away the soil. It took them three months. They paid about $3,500 for the clay.

The money helped the family survive through the yearslong drought that followed. But the land around the reservoir was left nearly barren. Paulo Dantas planted corn, beans and watermelon several years later, but the produce was so pitiful, they fed it to the cattle.

Then, last year, it rained much more than usual. The reservoir filled to about six feet. Hellena, Mr. Dantas’s granddaughter, swam in it. When it dried up, the family planted seeds. Grass for the cattle grew, but the beans and corn wilted.

“I really regret it,” Mr. Dantas said of selling the clay. “I saw it wasn’t good. But the children needed it.”

Standing on the reservoir’s embankment, he looked over the parched land as the sun set. “I had no choice,” he said.

Why an Easy Energy Fix Is Being Delayed

An Extraordinary Iceberg Is Gone, but Not Forgotten

E.P.A. Chief Vows to ‘Do Better’ to Protect Poor Communities