How Did the New Covid Variant, Omicron, Get Its Name?

Markets plunged on Friday, hope of taming the coronavirus dimmed and a new term entered the pandemic lexicon: Omicron.

The Covid-19 variant that emerged in South Africa was named after the 15th letter of the Greek alphabet.

The naming system, announced by the World Health Organization in May, makes public communication about variants easier and less confusing, the agency and experts said.

For example, the variant that emerged in India is not popularly known as B.1.617.2. Rather, it is known as Delta, the fourth letter of the Greek alphabet.

There are now seven “variants of interest” or “variants of concern” and they each have a Greek letter, according to a W.H.O. tracking page.

Some other variants with Greek letters do not reach those classification levels, and the W.H.O. also skipped two letters just before Omicron — “Nu” and “Xi” — leading to speculation about whether “Xi” was avoided in deference to the Chinese president, Xi Jinping. 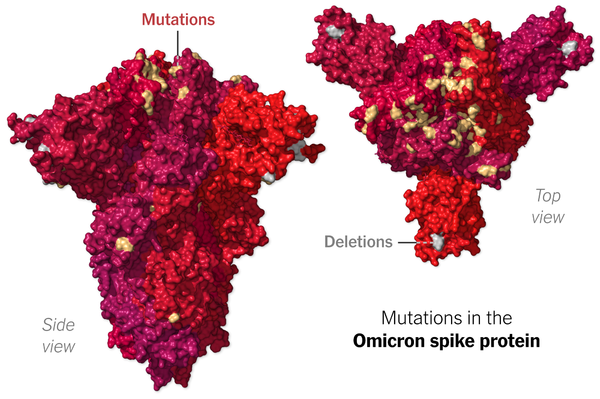 Tracking Omicron and Other Coronavirus Variants

See which countries have reported cases of the Omicron variant.

“‘Nu’ is too easily confounded with ‘new,'” Tarik Jasarevic, a W.H.O. spokesman, said on Saturday. “And ‘Xi’ was not used because it is a common last name.”

Some of the better-known variants, such as Delta, rose to a variant of concern. Others in that category were named Alpha, Beta and Gamma. Others that emerged, which were variants of interest, were named Lambda and Mu. Other Greek letters were used for variants that did not meet those thresholds but Nu and Xi were the only ones that were skipped.

The W.H.O. has promoted the naming system as simple and accessible, unlike the variants’ scientific names, which “can be difficult to say and recall, and are prone to misreporting,” it said.

Dr. Angela Rasmussen, a virologist at the University of Saskatchewan, said she conducted many interviews with reporters this year, before the Greek naming system was announced, and she stumbled through confusing explanations about the B.1.1.7 and B.1.351 variants. They are now known as Alpha, which emerged in the United Kingdom, and Beta, which emerged in South Africa.

“It makes it really cumbersome to talk about when you’re constantly using an alphabet soup of variant designations,” she said, adding, “Ultimately people end up calling it the U.K. variant or the South African variant.”

That’s the other big reason that the W.H.O. moved to the Greek naming system, Dr. Rasmussen said: The older naming convention was unfair to the people where the virus emerged. The agency called the practice of describing variants by the places they were detected “stigmatizing and discriminatory.”

The practice of naming viruses for regions has also historically been misleading, Dr. Rasmussen said. Ebola, for example, is named for a river that’s actually far from where the virus emerged.

“From the very beginning of the pandemic, I remember people saying: ‘We called it the Spanish flu. Why don’t we call it the Wuhan coronavirus?'” Dr. Rasmussen said. “The Spanish flu did not come from Spain. We don’t know where it emerged from, but there’s a very good possibility it emerged from the U.S.”

The W.H.O. encouraged national authorities and media outlets to adopt the new labels. They do not replace the technical names, which convey important information to scientists and will continue to be used in research.

At Least 6 Killed in Crush at African Cup Match

At Least 6 Killed in Crush at African Cup Match