A plan to “daylight” Tibbetts Brook in the Bronx would be one of the city’s most ambitious green infrastructure improvements.,

New York is a city surrounded by water, from the open ocean to bays to rivers. But there is also an enormous trove of water hidden below its streets and high-rise buildings — hundreds of subterranean streams, creeks and springs that were buried long ago and all but forgotten as the city grew.

Tibbetts Brook is one of them. Its final stretch was diverted into a drain in the Bronx around 1912 and sent down to the sewer pipes below to make way for development of the marshland where it used to run.

For decades, environmentalists and local activists campaigned to resurface the long-buried stream. Now, a changing climate is making what they struggled to achieve necessary.

The city plans to unearth the brook — an engineering feat known as “daylighting” — at a cost of more than $130 million, because burying it in the sewer system has worsened the city’s flooding problems as a warming planet experiences more frequent and intense storms.

Though out of sight, the brook pumps about 2.2 billion gallons of freshwater a year into the same underground pipes that carry household sewage and rainwater runoff to wastewater treatment plants. It takes up precious capacity in the outdated sewer system and contributes to combined sewer overflows that are discharged into nearby waterways.

So when the remnants of Hurricane Ida overloaded the pipes in September, the brook still had to go somewhere. And it did — gushing over land in some of the city’s worst flooding and pouring onto a highway, the Major Deegan Expressway, where it trapped dozens of cars, buses and trucks in rising waters.

“We became an international symbol of what happens when the city doesn’t prepare for flooding,” said Robert Fanuzzi, president of the Bronx Council for Environmental Quality, an advocacy group.

New York and other cities — including Auckland, New Zealand; Detroit; Seoul; and Yonkers, N.Y. — have increasingly looked at digging up long-buried waterways as they confront the twin crises of outdated infrastructure and climate change, according to Jenny Hoffner, a vice president for conservation strategies for American Rivers, an advocacy group.

“Building for the storm of today won’t really work anymore,” she said. “We need to be coming up with more innovative solutions that will ensure communities are resilient in the face of climate change.”

New York’s landscape was once covered with tidal creeks and freshwater streams, but as the city grew, especially in the 1800s, many became open sewers for waste, trash and industrial chemicals, said Eric W. Sanderson, a senior conservation ecologist for the Wildlife Conservation Society, who has mapped these hidden waterways. Many were cleaned up by burying them.

But even as the city built on top of buried streams and wetlands, Mr. Sanderson said, all that water did not simply vanish. Instead, it continued to flow and increasingly found its way back above ground as heavier rains filled the drains and pipes where it had been relegated. “The water is going to go where it wants to go,” he said.

Amy Chester, the managing director of Rebuild by Design, a nonprofit group, said that daylighting projects, like the one to reroute Tibbetts Brook, were important in making New York more resilient. “We’re looking back to see what we took away from nature,” she said. “And when we give it back to nature, we’re creating an asset to face climate change.”

The plan to daylight Tibbetts Brook would be one of the city’s most ambitious green infrastructure projects. The brook would be rerouted above ground for one mile — including along a former railroad line that would be turned into a new greenway — before being sent back underground for a half mile in a new dedicated pipe to the Harlem River. 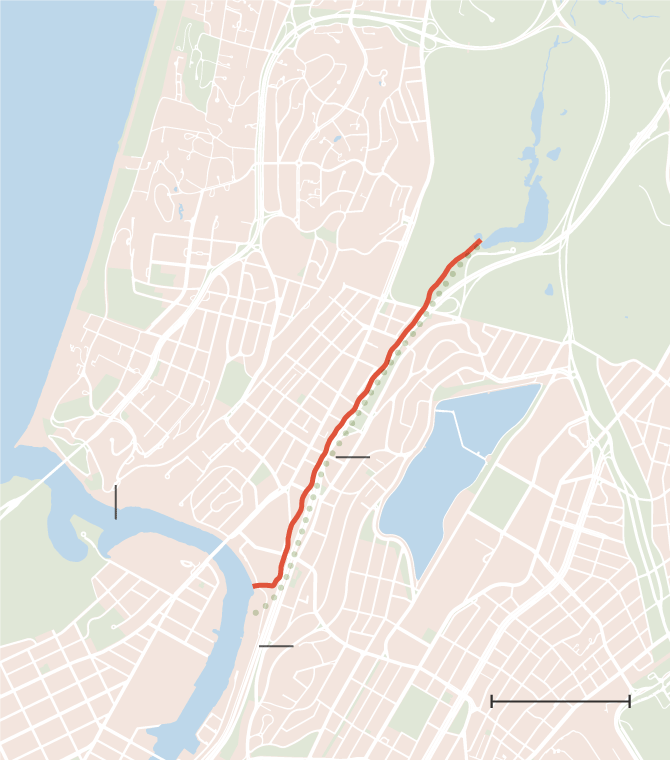 Senator Chuck Schumer, the Democratic majority leader, has said he will work with city officials to secure funding from the $1 trillion infrastructure deal and federal pandemic relief money to help pay for the project.

But the project still faces a significant hurdle. New York City has tried for years to buy the land along the former Putnam Railroad where the restored brook would run — a grassy strip next to the Major Deegan Expressway — from its owner, CSX Transportation, a railroad freight company.

City officials said they are hopeful of reaching a deal with CSX, though past negotiations have stalled over disagreements about the price of the land. Mr. Schumer and other elected officials and community groups have previously accused CSX of holding up the project. “It’s not doing anyone any good right now,” said State Assemblyman Jeffrey Dinowitz, a Democrat who represents the area. “Sometimes there has to be a little social responsibility involved in corporate decisions.”

CSX said in a statement, “We maintain our commitment to determining if a mutually beneficial transaction can be agreed upon.”

Tibbetts Brook starts north of the city in Yonkers, in Westchester County, and winds about four miles south into Van Cortlandt Park, a 1,146-acre Bronx park named after a wealthy Dutch merchant family that owned a plantation with enslaved people at that site. By the 18th century, the brook was dammed to create a pond, which is still there today, as a power source for the family’s grist and sawmills.

From there, Tibbetts Brook used to flow southwest through the Kingsbridge neighborhood, where earlier generations of residents crossed the brook on bridges and grew up fishing, swimming and rowing boats right outside their doors. It eventually reached what was then the Spuyten Duyvil Creek, where the Harlem and Hudson Rivers met at the northern end of Manhattan.

But that last stretch disappeared a century ago, in part because the city was developing, and local residents wanted more land to build on. “The idea was to take this marshland that these 19th-century residents did not value and make it dry land,” said Nick Dembowski, president of the Kingsbridge Historical Society.

Today, the brook goes down a drain at the south end of the pond, travels through a brick tunnel underneath the park to reach sewer pipes under Broadway and ends up at a treatment plant on Wards Island.

Mr. Fanuzzi, of the Bronx environmental council, and other advocates have called for daylighting Tibbetts Brook since the 1990s to help clean up the Harlem River, to increase community access to the Bronx waterfront and to build a greenway to connect neighborhoods across the borough. City park officials included the project in a 2014 master plan for Van Cortlandt Park.

But it was not until Tibbetts Brook became part of New York’s green infrastructure efforts in 2018 that the plan started moving forward. “It was always a good project, but it laid dormant and we reignited it,” said Angela Licata, a deputy commissioner at the city’s Department of Environmental Protection.

Taking the brook out of the sewer system would reduce combined sewer overflows in the Harlem River by 25 percent, or by 220 million gallons annually, according to the city. “It makes this one of our most cost-effective projects,” Ms. Licata said.

The project would also include making improvements to the pond in Van Cortlandt Park and building new walking and biking trails in an underused park section that would connect to the new greenway on the old railroad line.

Stephanie Ehrlich, the executive director of the Van Cortlandt Park Alliance, a nonprofit group that supports the park, said the brook would serve as an important reminder of the legacy of enslaved Africans who worked on the Van Cortlandt plantation. “We have an opportunity to share that history,” she said. “It’s the hidden story of the park.”

For many Bronx residents, the return of Tibbetts Brook would be the culmination of a three-decade campaign to undo the past.

Dart Westphal, 68, a longtime environmental advocate, said he first started pushing to bring back the brook as a way to increase access to parkland in a borough where much of it has been fragmented by roads and development. Now, climate change has given him reason to believe those efforts will finally be realized.

“You have to do this to make the city sustainable,” he said.

Storm Moves Into the Northeast After Heavy Snow in the South

Storm Moves Into the Northeast After Heavy Snow in the South